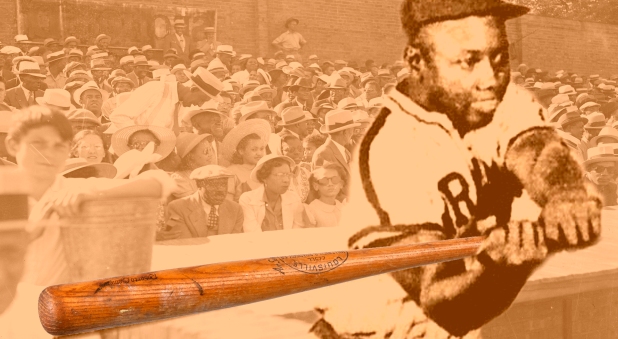 Illustration from p. 14 of the book “Lucky Bats”

One of Elijah “Lucky” Miller’s favorite stories was seeing Josh Gibson hit a monster home run out of Page Park in Monessen, Pa. Before I met him, when he was “only” 98, he told the story to Peter and Per Argentine in a video interview:

He said then that the Homestead Grays catcher hit the ball over a steel mill and into the Monongahela River, a nice precursor to modern-day shots out of PNC Park into the Allegheny River. I used the story in a newspaper article in 2009 and received a call from Art Trilli of North Belle Vernon, now 94, who said he was there that summer day in the early 1930s. Then about 12 years old, he believed it was a game against the House of David, a Michigan team that he said played the Grays once a year in Monessen.

I spoke with Trilli again today (April 21) and got more details. He said Gibson’s screamer easily cleared a garage in deep left field that was marked 465 feet, sailed over a driveway and struck the side of a building in the American Chain and Cable plant, Page Division. The ball struck it high on the side, at least 30 feet from the ground. That building was at least 550 feet from home plate, he said. Imagine how much farther it might have traveled!

“I don’t think anybody has ever hit a ball that hard,” Trilli said.

But what about the river shot? Trilli confirmed what other Monessen old-timers had told me years ago. Home plate at Page Park was close to the river and faced toward the mill. The only way Gibson’s hit could have ended up in the river is if it was a foul tip. In fact, Trilli said he was standing by the backstop that day to catch foul balls before they ended up in the water.

It’s one of the few slips I’ve found in Lucky’s incredible memory.

In 2007, I was talking via email with Dan Cohen, then curator of the Louisville Slugger Museum & Factory in Kentucky. Lucky had recently told me that Gibson had three bats numbered 7, 8 and 9. I wanted to know if Bradsby & Hillerich’s records show what size bats they had made for Gibson. The company had no records on that, but Cohen did say that long-ball hitters often used bats of different weights depending on the speed of the pitcher they faced.

Months later, he found two 1975 letters in the company’s files, from Cool Papa Bell and Buck Leonard. Both were Gibson’s teammates and later inducted into the National Baseball Hall of Fame in Cooperstown, NY.  Leonard often batted just before or after Gibson and sportswriters called them the Thunder Twins.

Bell’s letter says that he used a bat that was 35 inches long and weighed between 38 and 39 ounces. In his letter, Leonard says:

“Grays always bought Louisville Sluggers. In Mexico we asked for “Sluggers” and the longest home run I ever hit was in Yankee stadium in 1948 using a slugger.” Then he adds:

“The longest homer hit by Josh Gibson was in Monessen, PA. while using your company’s bat.”

Leonard was a very religious man, just like Lucky. Why would he lie about that homer in Monessen, the longest one he had every seen his friend hit?